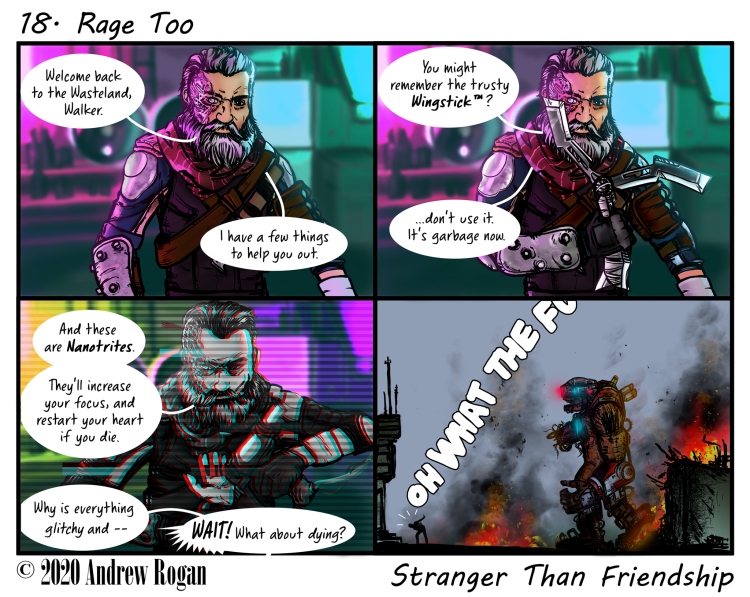 Rage 2 did a lot of things well, but it just didn’t feel like its predecessor. It didn’t have the same gritty, dark feel, but more like an adrenaline fueled arcade version. Like the movie Crank, where your heart isn’t allowed to slow down.

The gunplay was fun, I’ll give it that. Each hide-out or mutant cave was fun to take down. It never felt repetitive. But the focus was always on the speed and explosive nature of the fights, and less on strategy and nuance that the first game had. The first game was creepy and ominous at times because enemies in the world were a threat. In Rage 2, they’re playthings. You have so many different types of weapons and abilities at your disposal that it feels more like Devil May Cry, where the fights are more about style and variety. The game is a first person shooter version of Mad Max and Just Cause mixed together. Which I guess makes sense because it was developed by Avalanche Studios.

They also neutered the wingstick. Most of the enemies are covered in armor, which makes the wingstick useless. Might as well throw it against a wall.

I also experienced a lot of technical issues with the game. The menu would freeze and hang, depending which way you tabbed though the different settings, and I would lose audio quite frequently in the open world, while driving around. Checked the online forums, and the recommended fix was to restart the game. Awesome.

Anyways, I beat it. And all the DLC. So at least that says something.